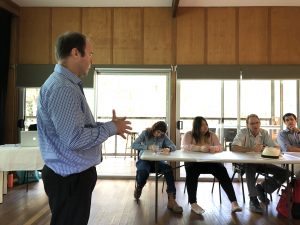 Last week, frc environmental’s Dr Ben Cook lead a very productive native fish management workshop on behalf of Redland City Council.  Recognising the implications of the recently gazetted Biosecurity Act, Redlands City Council is keen to develop a clear framework that will support its response to its General Biosecurity Obligation, and allow that response to work synergistically with its existing initiatives focused on the sustainable management of wetlands and waterways.

With attendees from a number of other local authorities, Griffith University’s Australian Rivers Institute, the Quandamooka Yoolooburrabee Aboriginal Corporation, Seqwater, Department of Environment and Science, Department of Agriculture and Fisheries and ANGFA, Ben lead discussions of the close relationship that exists between native fish populations, habitat quality and introduced fish populations, and of the range of actions Council might consider including those relating to policy, regulatory and on the ground actions.

The workshop’s consensus view was that actions aimed on ‘stacking the odds in favour of native species’ should be the theme around which future actions are prioritised.